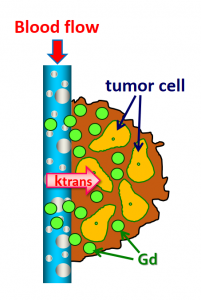 To characterize the leakage/permeability quantitatively we rely mostly on the ktrans that refers to the transfer constant of the diffusion of contrast agent between tumor vasculature (the plasma compartment) and interstial area of tumor (the compartment of extravascular, extracellular space, EES). The ktrans has been correlated well to the tumor permeability by comparing with pathological findings and Microvessel Density. The more the leakage is the higher the ktrans due to more leaking “pores” on the abnormal vessel walls related to angiogenesis. A post therapeutic decrease of ktrans values can be attributed to tumor response to therapy, whereas increase of ktrans values may indicate tumor recurrence. This is not only valid to the microcirculation change during cancer therapy caused by targeted therapeutics but also the chemotherapies and radiation therapy.

Dynamic Contrast-Enhanced MRI has emerged as a method to provide predictive, prognostic and pharmacodynamics response biomarkers for cancer. There is a consensus that ktrans and iAUGCBN should be utilized as quantitative endpoints when applying DCE-MRI to the evaluation and development of anti-angiogenic and anti-vascular therapies. 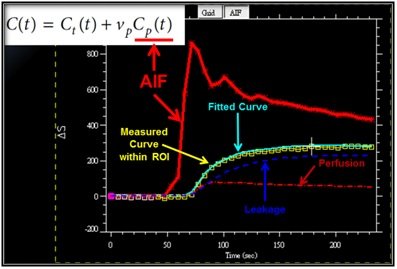 The 5 curves in the graph explain the leakage process detected in a tumor and what PK Modeling (Pharmacokinetic Modeling) actually means.

Note that the cyan curve is the sum of both perfusion and leakage curves. This elegantly explains the two-compartment pharmacokinetic model that the contrast enhancement Ctotal(t) in each ROI or pixel consists of the portion within the vessels Cvessel(t) and out of vessels Ctissue(t). 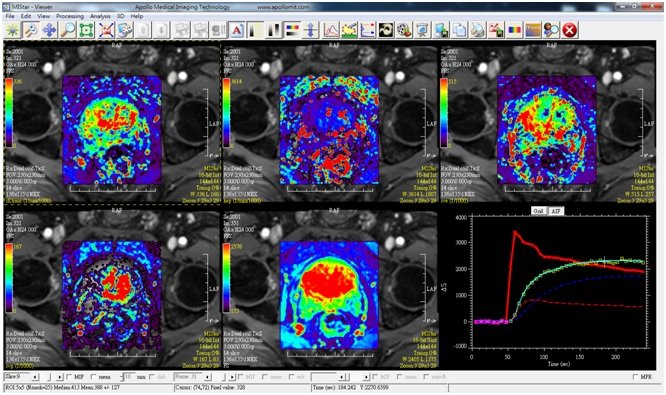 Contact us for more information about our imaging product and service: info@twan-biotech.com