A 56-year old female patient was diagnosed with stage IV lung adenocarcinoma.
One year later brain metastasis were noted as MRI delineated in right parietal lobe with the other two small lesions in the right parasagittal and left occipital lobe. The three lesions were treated by Gamma Knife smoothly in Dec. 2008.

6 months after gamma knife radiosurgery the follow-up MRI showed nodule around 10mm in parietal lobe and the other tiny one around 4 mm as its left side.
Further MRI follow-up in Nov. 2009 noted same lesions without definite change in size in comparison with previous MRI.
Below are conventional and enhanced images in Jun. 2011 with T2*-DSC-MRI analyzed with Singular Value Decomposition (SVD) Deconvolution.

Note that neither conventional enhanced images nor T2* DSC-MRI analyzed with Singular Value Decomposition (SVD) Deconvolution were able to differentiate the radiation effect from recurrent tumor. 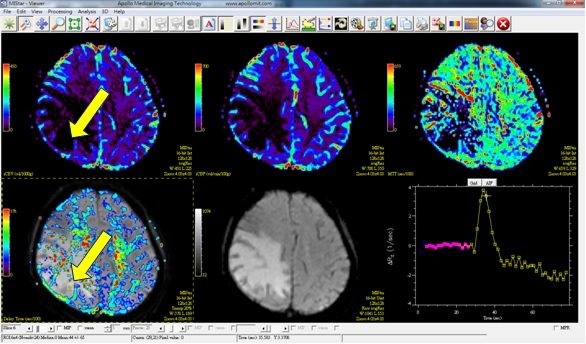 The K2 and the corrected rCBV maps processed by MIStar using Weisskoff Model (Reference below) showed however the leakage on the same dataset. Note that the leakage curve (dotted blue) dragged the perfusion curve (thin dotted red) down to the converted R2 curve (yellow) and the model analysis did a good job since the fitted curve (cyan) runs closely to the R2 curve. 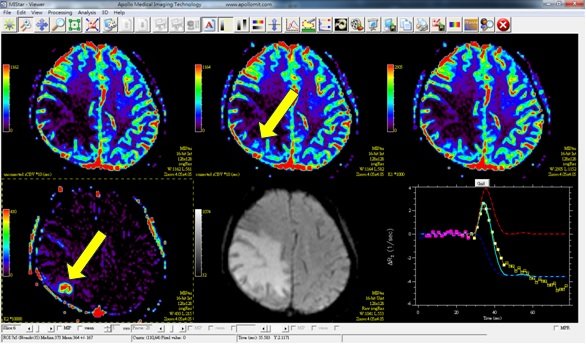 The T1 DCE-MRI dataset were acquired three days later than the T2* DSC-MRI exam. Images at the same locations with 5 different flip angles were acquired before the T1 DCE-MRI acquisition. MIStar calculates the T10 map to convert the signal intensity-time to concentration-time curve. On the right hand side the ktrans map by Tofts 1999 Model delineates the ring of the lesion. It was proven to be a recurrent tumor by pathology. 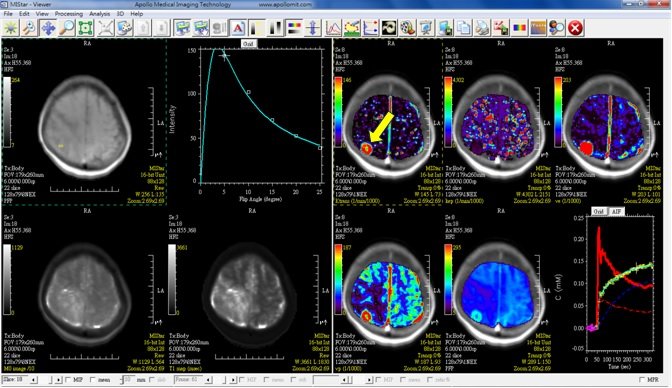